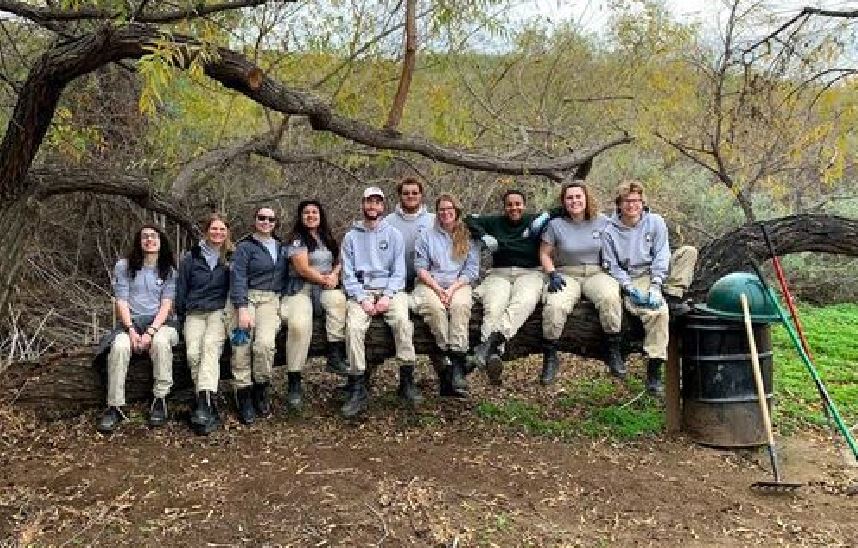 An AmeriCorps National Civilian Community Corps Pacific Region team, Blue 8, is assisting with projects throughout the region through April 9.

The team is comprised of 10 young adults from across the United States who are serving together to get things done for a 10-month service term.

“AmeriCorps, the National Civilian Community Corps is a program for 18 to 24-year-olds from all over the nation to come and basically just dedicate 10 months of service to give back to America and back to the communities that we serve in,” Katie Chookagian, the media representative for AmeriCorps NCCC team Blue 8, said. “There’s different regions throughout America. And we were all assigned to the Pacific region, which includes California, Nevada, Utah, Washington, Oregon, Montana, Hawaii and Alaska. And then the Pacific islands as well. We just get assigned different projects. We do three to four projects during our service term.”

So far, the team has been working at Habitat for Humanity Inland Valley’s ReStore building furniture, did a weekend Independent Service Project with I Love A Clean San Diego in Fallbrook, helped clear a watershed area of trash as well as paint conservation messages on storm drains. They also worked one weekend at the Western Eagle Foundation in Temecula. When Valley News caught up with the team last week, they were cleaning up trash that blew away from the El Sobrante Landfill during recent Santa Ana winds.

In all, they have 11 projects to complete as part of the Riverside Communities Partnership Project.

“My team certainly has been doing a lot of fire abatement,” Chookagian said. “We have done just a lot of conservation type stuff and invasive species and ruble just to help the land. Our first sponsor here was the Santa Margarita Ecological Reserve and we helped there in the vineyard and with pulling weeds, taking care of the citrus groves that they have there.

“Then we were helping at Sycamore Canyon planting native poppy seeds,” she said. “We were actually in Riverside last week or helping them with a point-in-time count for homeless youth. So that was a different opportunity for us aside from all of the nature conservation type work we’ve been doing.”

None of the members of the team are from California.”Funny enough, most of us are from the east coast,” Chookagian said. “I’m personally from Pennsylvania. We have someone from New Jersey, Maryland, Iowa, Illinois, Minnesota, Kentucky, Oklahoma, Texas. We’re from all over, and we’re basically all either out of high school, out of college or in between college. And we just wanted to find something. We wanted to be able to make a difference, do something worthwhile with our time to give back to communities. That’s why we’re all in the program.””It’s funny, a lot of people don’t think that we can do much, but we can do a lot fast with 10 people willing to work hard,” Chookagian said.

So far, she said she’s been impressed with her stay in the area.

“I can speak for myself, the area’s so beautiful,” Chookagian said. “Nothing like I’ve ever seen in Pennsylvania. Coming here to Southern California was my first time seeing a cactus in person. So it’s really cool. It’s January or February now, but I keep forgetting that it’s wintertime because it’s so warm here.”

She said she’s been impressed with California’s policies regarding environmental care.

“There are so many things that are just different about this area that you’d never think of because it’s all part of the same country, but it’s just such a different place here,” Chookagian said. “All the things that California does to try to make a difference in their carbon footprint, all that with the bags like back home and Pennsylvania, we don’t even have to pay for the paper or plastic bags at the grocery store.

“It’s really cool to see that California as a whole is trying to make a difference, and it’s awesome that we can be a part of that and be a part of trying to help save the land here and take care of it.”

She said a lot of the team is excited about bringing the things they learn while working back home with them.

“One of our team members, his name is Ryan, he graduated last spring with his bachelor’s degree in Environmental Science,” Chookagian said. “It’s been actually really cool to see him be able to make contacts through the work we’re doing. He knows the next step he wants to take in his career to be able to help with environmental stuff. He’s from New Jersey, so he’s gonna go back there, and I imagine he’s very excited to implement a lot of the things we’ve learned and bring them back home.”

For more information about AmeriCorps NCCC, visit the website at http://www.nationalservice.gov.

Jeff Pack can be reached by email at jpack@reedermedia.com.